How Shipping Containers Took Over The World

Globalization and free trade across the globe have benefited the economy of every country directly or indirectly. In this trade era, shipping containers have contributed to the ease of transport significantly. The scenario which we see today is very different from the time before shipping containers were invented. This article elaborates on how the invention of shipping containers revolutionized the overseas trade.

Trade Difficulties Before the Invention of Shipping Containers 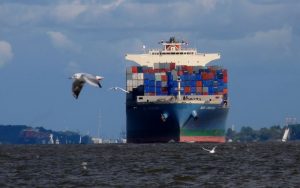 As mentioned earlier, the traditional shipping style was very different from what we have today. The major transition took place after the concept of shipping containers came into the picture.

Previously, breakbulk shipping was the traditional manner in which goods were transported. In this method, goods were loaded onto the cargo ships directly. The maximum rate of loading cargo was 1.3 billion tons per hour, and the maximum load limit was 200,000 individual pieces. The loading and unloading of freight was a task in itself and could take weeks. Further, the cost of loading was quite high, at $5.86 per ton. This port loading cost made up approximately 60-75% of the total transportation cost. It wasted time and labor and contributed to theft and damaged goods.

The Benefits of Shipping Containers

In 1956, Malcolm Mclean invented and introduced the concept of shipping containers. The first container ship was named “Ideal X.” It was specially designed to carry cargo containers instead of individual pieces of cargo. It sailed from New York to Houston.

When the Vietnam War surged, the demand for containers rose. Transporting goods to support the war effort became necessary, and more than 1200 shipping containers started to be transported monthly.

Shipping Containers of the 21st century

Realizing the benefits of shipping containers, their demand rose drastically worldwide. A standard of construction material and dimensions was established, and the containers were designed to be stacked. They were also now able to be loaded onto trains or trucks directly, making them very versatile. While the number of containers lifted in 1950 was merely 50 million, the number increased to 600 million in 2012 for Asia, North America, and Europe.

The cost of loading has reduced to just $0.16 per ton. The time required for loading has also decreased. Now the cargo can be loaded at a rate of 10,000 tons per hour. More than 90% of goods are now transported via shipping containers to minimize the damage and spoilage.
Abandoned shipping containers can also be reused for various purposes, like building homes, restaurants, offices, and storage facilities. Annually more than 500,000 discarded containers are put to such alternate uses.

These benefits clearly state how the shipping containers have led to a healthy transformation for the shipping industry.

For more information on how you can use shipping containers for your business, contact Allstate Containers at 704-802-7700.